You are at:Home»Human Rights»Discrimination»UN finds mass graves of Hazara killed by Taliban 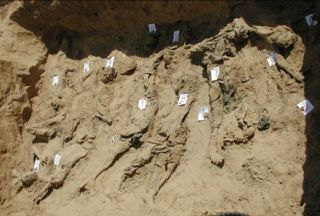 By Hazara People on April 8, 2002 0 Comments
Share this story United Nations investigators found evidence yesterday of three mass graves near the central Afghan city of Bamiyan, believed to contain ethnic Hazaras killed by the Taliban in their last month in power.

United Nations investigators found evidence yesterday of three mass graves near the central Afghan city of Bamiyan, believed to contain ethnic Hazaras killed by the Taliban in their last month in power.

The graves were found in a bleak stretch of land by an airfield on a plateau overlooking Bamiyan, which was largely destroyed by the Taliban. The Taliban persecuted the Hazaras, who number some three to four million in central Afghanistan, as heretics because they are Shia Muslims in a country that is largely Sunni.

When the Hazaras were buried or how they died is not clear. But Manoel de Almeida e Silva, the UN spokesman, said: “Representatives of the Hazara community in Bamiyan believe the graves contain bodies of members of their community killed … approximately one month before the fall of the Taliban.”

If the bodies in the graves were indeed killed last November then this would be the only massacre by the Taliban during the war with America and the Northern Alliance last year. The slaughter would be no great surprise; the Taliban hated the Hazaras, who are easy to identify because of their Mongolian features.

Earlier last year some 178 people were alleged to have been killed by the Taliban, also in Bamiyan province, in retaliation for guerrilla attacks. According to the UN, a 16-year-old boy was skinned “from head to chest” and his body dumped behind the local Oxfam office.

Mr de Almeida said the graves had been cordoned off and foreign forensic scientists might be called in. He said the Hazara leaders in Bamiyan wanted to exhume the bodies to give them a proper burial but had agreed to wait for a short time so the crime could be investigated by the UN.

The central highlands of Afghanistan – known as the Hazarajat – are the homelands of the Hazara, who have long been seen by other Afghans as an underclass and employed as menial labourers. Once largely independent, they were conquered by a Pashtun Afghan king in 1893 but, as almost the only Shia group in Afghanistan, were seldom left in peace.

Overrun by the Taliban in fierce fighting, the Hazarajat was ravaged by guerrilla warfare in the past five years. Many Hazara became refugees and fled into the mountains. Bamiyan city, which lies in a fertile valley, is now largely in ruins with all its modern buildings systematically blown up.

Last summer the Taliban outraged the world by blowing up two 1,500-year-old Buddhist statues carved out of a sandstone cliff overlooking Bamiyan. They said they objected to them because Islam forbade the portrayal of the human form.

Hazara leaders, for whom the statues, Afghanistan’s most famous archaeological remains, were a symbol of their identity, have spoken of trying to reconstruct them. This will be difficult because the Taliban demolition was all too effective, reducing them to rubble.

That the three mass graves have remained undetected since the Taliban fled from Bamiyan last December is not surprising. The central highlands are full of refugees trying to return to their villages, often finding that their houses have been destroyed and their flocks of sheep slaughtered or stolen.

Many of the refugees were forced to live in more than 1,000 caves cut into the rock of the cliff face beside the niches where the giant Buddhist statues once stood.

Hazara leaders say some 15,000 of their people were killed by the Taliban in recent years. But they had fared little better from some of their Tajik allies in the Northern Alliance. Before Kabul fell to the Taliban in 1996, forces fighting there, led by Ahmed Shah Massoud, for long the military leader of the Northern Alliance, killed some 700 Hazara and devastated their quarter of the city.

Early yesterday, meanwhile, at least two rockets were fired at the headquarters of multinational peace-keeping troops in central Kabul. The attack caused no injuries or damage and came days after Afghan officials said a plot to destabilise the interim administration had been foiled.

Afghan officials said yesterday they would not rule out involvement of fundamentalist groups in the rocket attack, including remnants of the Taliban regime and followers of the one-time prime minister Gulbuddin Hekmatyar.

Lieutenant-Colonel Neal Peckham said: “The guards on duty at that time reported what they thought was a rocket-propelled grenade attack against the location which houses the Kabul headquarters of the multinational brigade. The impact was merely two hundred metres from the perimeter fence.”

A Foreign Ministry spokesman, Omar Samad, claimed that pockets of Taliban and al-Qa’ida fighters were regrouping with the help of what he called local and foreign fundamentalists aimed at toppling the interim administration.